I have been bringing people on tours by foot, by bike and by bus for the last eleven years.  Most of my touring work has been in the west of Ireland but I am also a qualified national tour guide who has toured the rest of the country and the U.K.

My background is in the Arts, a result of having lived in the artistic Galway city for most of my life.  I have a B.A. in English and Classics and a Masters in Screenwriting.

I have made a couple of small films one of which was shown in the Galway Film Fleadh in 2018 (A Curious Burial Arrangement/ 20mins on You Tube) I also love to paint and write.  Interests are varied: Nature, history, sport, art and Irish folklore, particularly fairy culture.  I was a handweaver with Avoca Handweavers, I was a fisherman, both on trawlers and in fish farms.  I worked in bars, on building sites and in tarmac gangs.  I have also acted and worked in theatre.

I have lived in 8 places around the country before I arrived in Galway at the age of 13 and many more after that.  I am still attracted by the road and love to bring people with me around this great country of ours. 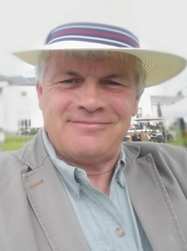