I have owned and operated a small business called Heart of Burren Walks for the past ten years. I lead walks in the majestic, rocky Burren of North Clare. Heart of Burren Walk is the number one Trip Advisor activity in County Clare. My first book “The Burren and the Aran islands A Walking Guide”  was published by Collins Press in 2009. Recently I produced the short film “Saint’s Bed, Rag Tree, Holy Well” and it screened in the Cork International Film Festival 2012. Heart of Burren Walks is one of the founding members of the Burren Eco Tourism network promoting responsble travel to the Burren region. I am currently leading a research project in to the 50 or so holy wells of the Burren.

The guided walks have featured in the Irish Times, The Sunday Business Post, the Sunday Tribune, the Guardian (U.K.) and the West Australia newspaper ; RTE Radio (Mooney Goes Wild), CBS radio (Peter Greenberg) ; RTE televison (No Frontiers). Moreover, Heart of Burren Walks is strongly recommend by guide books Fodor’s, Frommers, Lonely Planet, Ireland for Dummies and Guide De Routard. I guide principally in the Burren but also in the Aran Islands, Galway city, Connemara and County Kerry. Slán tamall (Bye for a while).

Testimonials
“Kirby slips in nuggets of information as if they were breaking news” Lorna Siggins, Irish Times. May 2012.

“Hi Tony, My name is Brad Thompson and I’m a journalist employed by The West Australian newspaper. I was lucky enough to be a guest on one of your walking tours in June 2010.

Thanks for showing us around the Burren and for such an entertaining and interesting afternoon. Kind regards, Brad”.

“Tony Kirby is a man of many parts. I’m still trying to figure out whether he is an historian, raconteur, writer, linguist, archaeologist, geologist or poet” Frank Hopkins Sunday Tribune. June 2010. 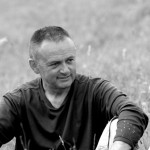